One of the main differences between iOS and Android is that Apple does not allow iPhone users to download apps that are not on the official app store, the App Store. Google, for its part, is more open. Indeed, if there is an equivalent of the App Store on Android, users can use third-party stores, or even download an .apk file to “manually” install an application.

And while Apple is still in conflict with Epic, a project from him is currently being studied to frame the digital giants. This, if passed by Congress, would require Apple to allow sideloading, or the installation of applications that are not on the App Store.

Of course, Apple wants to keep the control it exercises over iOS. Also, in order to defend its closed system, the Cupertino company uses security as its main argument. In essence, according to Apple, if it allowed iPhone users to install apps that have not been approved by the App Store, it would make it easier for malware to enter the platform.

While the bill is still under consideration, Apple must defend its model. As reported in an article by Reuters, the firm recently sent a letter to key members of the US Senate Judiciary Committee, after a cybersecurity expert said the firm’s concerns regarding sideloading are ” unfounded”.

According to the Reuters article, in its pitch, Apple explained that in most cases malware does not gain access to the system through technical means, but by tricking the user into downloading it. And still according to Apple, the control of applications by the App Store “creates a high barrier against the most common scams used to distribute malware. »

“There is ample evidence showing that third-party app stores are a key malware vector on platforms that support these stores”we would also read on this letter.

Note that in addition to sideloading, this bill could also oblige Apple and Google to authorize developers of iOS and Android applications to use third-party payment methods (for purchases of subscriptions or services on apps), on which these digital giants will not take a commission.

In Europe, a similar bill is in the works. This is the Digital Market Act. And like the US bill, the DMA could also force Apple to accept sideloading. This would, for example, allow iPhone users to install Fortnite, even though that game is no longer available on the App Store. 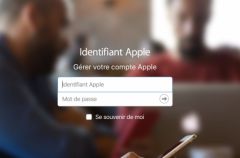 Apple will allow everyone to check, download and modify the personal data used