Even with the many music streaming options to choose from these days, Spotify is still the king for millions of users. While the app is enjoying a long, successful run, it hasn’t shined in every category. Real-time lyrics have been notably absent from Spotify’s features for some time now, as competing services like Apple Music and Amazon Music. Luckily, that changes now.

Spotify is finally rolling out its real-time lyrics feature to all users, both free and premium, today, Thursday, Nov. 18. However, it’s possible that you saw the news, fired up your Spotify app, and were greeted by a whole lot of nothing. If so, there are a couple of tricks you can try to get the feature to appear faster.

How to get real-time lyrics on your Spotify account

First, make sure your Spotify app is fully updated. While it isn’t clear if this feature is tied to the latest Spotify version, we’ve seen the feature appear after updating the app. So, head to whichever device you usually use Spotify for, and check that you’re running the latest software version possible.

Still not showing up? That’s what happened to me on my iPhone. Even after an update from the App Store, I didn’t see real-time lyrics. The next move, I’d suggest, is logging into Spotify from a new device. This feature works on all mobile and desktop devices running Spotify, so give it a try on another phone, tablet, or computer. For me, I only saw the feature once I downloaded and logged into Spotify on my Pixel 4. When I went back to my iPhone, it magically appeared there, as well.

How to use Spotify’s real-time lyrics on mobile, desktop, or TV

On mobile, this feature is simple to use. When you tap on a song that has real-time lyrics, you’ll see a “Lyrics” window peeking out from the bottom of the display. If you scroll down or tap on this window, it’ll expand into a larger lyrics window, showing you a short preview of the song’s Musixmatch-powered lyrics (current lyrics are highlighted in white). If you tap on this window again, however, it goes full screen, allowing you to scroll through all the lyrics.

On desktop, the feature is a bit more hidden. When you choose a song that has real-time lyrics, you’ll see a small microphone icon appear next to the Queue icon. Click the mic, and you’ll see a large lyrics window appear. Unlike mobile, it seems you can’t see the entire song’s lyrics right away. Instead, you’ll only see the current lyrics, plus the next two lines or so.

If you use Spotify TV, you’ll find the lyrics button in the top-right corner of the Now Playing view. In addition, we should soon see this feature heading to PlayStation 4, PlayStation 5, Xbox One, Android TV, Amazon Fire TV, Samsung, Roku, LG, Sky, and Comcast, so anywhere you listen to Spotify, you can follow along with the lyrics.

Quick answer: How to buy v bucks on iphone with credit card? 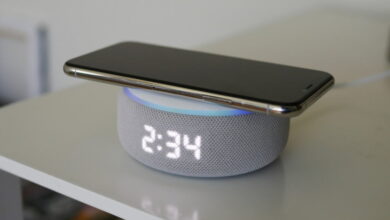 How to change caller id name on iphone koodo?

You asked: How to buy an iphone se? 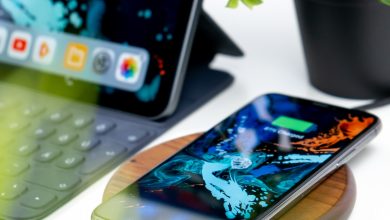 How to charge your iPhone without a mains charger

How to clean iphone xr?

How to check dpi of image on iphone?