The iPhone allows you to make video sequences at any time. And among our now long series of Sunday iPhone application folders is an article on useful applications for mounting, editing, improving films and videos.

As the number of this type of applications continues to increase, we have decided to revisit this file to complete it. Impressive, surprising or simply practical, there is something for everyone. Here is a selection of top iphone apps for video To discover or to rediscover. They are of course also iPad compatible for the most part. And while some are free, paid ones are mentioned as such.

The essential applications for filming on iPhone and iPad

Filmic Pro: the recommendation of professionals

It’s when we look at the tools used by reporters and other short filmmakers (or more) with the iPhone, the most often cited application. For good reason, elected several times video app of the year by Apple, it offers many settings that are not offered by the standard iOS app. The settings for white balance, focus, resolution, but also the taking into account of the zoom, everything is there.

The application can be controlled via the Apple Watch or with an external app and even supports Dji Oslo stabilizers. A pro app, usable on iPhone and iPad, at a reasonable price. We can also mention the Filmic Remote companion app available here on the App Store which allows you to control the Filmic Pro camera remotely from another device. Filmic Pro, at the top of applications for filming with the iPhone or iPad.

Here is an alternative to Filmic Pro, which is cheaper and comes with many advanced features, like exposure control, focus, white balance, image quality, framerate, video support 4K or even support for external microphones in Bluetooth. It is for example possible to use the AirPods as an external microphone for a video. This app also has a remote control app available here on the App Store to control the camera remotely from another iOS device.

Released in 2015, this app does not benefit from the notoriety of Filmic Pro, but offers tools and settings that seem particularly complete, especially in terms of level meters. There is separate control of exposure and focus or even shutter speed or color temperature, but also the use of external microphones, a visual audio meter, manual volume control and monitoring via headphones. Intended for the most connoisseurs, it is not suitable for “leisure” use and does not support the iPad.

The Best Apps to Edit Movies and Videos on iPhone & iPad

Splice, to simplify your life

Splice is a free video editor acquired by GoPro and made free that will be perfect for those looking for simplicity and efficiency in video processing. Film then retouch by adding titles or sound to give a more professional look to your video, that’s what Splice offers you. It is even possible to post the result on YouTube directly from the app.

Quik is, as its name suggests, an app made for those who don’t have the time. It also now owned by GoPro offers to make, based on photos or clips, video editing very easily. The application automatically analyzes the sequences in search of the best moments, it adds transitions and effects and synchronizes everything to the rhythm of the music. 26 different styles of videos are offered, with filters, transitions and graphic illustrations. Layers with texts and emoticons can be added and the music is of course customizable.

You may be surprised to find Vimeo, YouTube’s competitor in this case, but if you’re a regular on the site, you’ve probably already read the ultra-comprehensive test carried out in this post. Indeed, the Vimeo application offers a more than respectable free video editor that will serve you well. Editing, adding a title or soundtrack and even filters, everything is possible in this app that I invite you to try.

Probably one of the best video editing apps on iPhone and iPad, which we tested in a dedicated article and which offers a customizable interface that will appeal to fans of Final Cut Pro on Mac. It includes many standard and professional features not present in other apps, such as 3 video tracks and 3 audio tracks, export and import of projects, support for 360 videos, or image inlay thanks to to the “chromakey”.

It is regularly updated with new features.

This application is the reference of video editing on Android and it is now available for iOS users. It offers many pro features missing from the iMovie app, such as multitrack for video, audio, image and text, a very complete module to add and edit each media element, 3D transitions and much more. . The app is free to download and try with a subscription model that removes the watermark and provides access to premium content on the app’s online store. It takes €4.49 for a month, or €25.49 for the year.

Is it still necessary to present iMovie? Application initially available on Mac then on iPad, the iPhone is also entitled to its version of the headed software. If you had to have only one application to process video on your iPhone, it’s certainly this one, in addition it has become free. With iMovie, video editing becomes accessible to everyone. In a few minutes and at your fingertips, edit a film by adding effects, music or even both. It is also possible to insert titles and transitions, in short to render pro with the iPhone before sending it to YouTube, for example.

This app is the Rolls Royce of live or delayed video editing allowing you to film sequences with pause and zoom. It offers an editing part: intro and end sequences (optional), music, change of order of sequences and transitions, everything is there! It is rather expensive, but offers some quite useful features!

To play with time

Some like to go slow and some like to go a little faster. It is this second category of people that the application offered by Instagram is aimed at. It is about “time lapse” that it is a question. In other words, we film as usual and then speed it up. What this app brings is the stabilization that is essential for this kind of videos. The result is simply stunning, even at normal speed, it gives unparalleled quality. Not to be missed, especially for those who love beautiful images:

You love Wallace and Gromit for example and more generally stop motion films, then this app is made for you. Stop motion consists in making a film from a succession of photos, thus making it possible to give the impression of animation of the objects. Well, that’s exactly what iMotion HD offers you to do, and all for free. The stop motion requires a little patience, but you will very simply be able to obtain nice results. The icing on the cake, a second remote control app allows you to trigger remote photo taking with another iPhone, for example.

Psssssst :  How to download photos from iphone to macbook pro?

While some people like to film and then edit the videos with patience and meticulousness, others prefer to keep it short to better share them. With this in mind, social networks have come to add their two cents and offer apps that allow you to film videos of a few seconds, giving way to surprising results. Instagram is the reference in the genre.

Who has never dreamed of finding themselves at the helm of the production of a super Hollywood production with special effects, explosions and all the rest? With this app in two clicks, you can make your dream come true thanks to the special effects made available free of charge. Launching a missile at your neighbor’s house or crashing a car right in front of your house is possible in moments thanks to Action Movie FX. With this application, let the director who is in you speak! Numerous and varied packs make it possible to enrich the app.

In fact, Emulsio is a bit of a cheat, but we don’t care, because the result is there. The process is simple, but as usual, you had to think about it. Capture your video as usual with the native iPhone app. Once it’s done, notice how the video is choppy and shakes all over the place. Launch Emulsio, and once in the app, all you have to do is crop the video, you will lose some frames on the sides, but the video is recalculated to eliminate the “shake” effects.

Clever, no? To be done before editing in iMovie.

Because video can be serious, even on the iPhone, as we have seen with some of the apps above, you also have to help the smartphone with accessories. There are many, you can find some in our selection:

Finally, remember that this type of file cannot be exhaustive. You will inevitably have other applications to recommend because you appreciate them and use them on a daily basis. Do not hesitate to do so via the comments by indicating their strengths and your preferences! 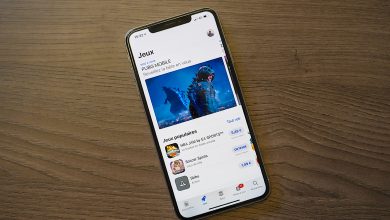 How to block downloads on safari?